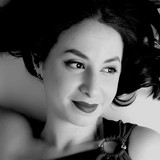 Hayat Selim is an Egyptian born and raised singer-songwriter and film composer. She started her journey with music playing the piano, singing in choirs and songwriting. In 2009 she started her first steps in composition through songwriting and started performing as solo artist, in ensembles and choirs in Cairo. 2015-2017 she has been active in the Egyptian industry as composer for video games and film. In 2017 Hayat moved to the United Kingdom on a scholarship to do a masters in composition for screen at the Royal College of Music, London,

where she is now based. Hayat's music merges Western cinematic orchestration with world music influences, electronic/nature soundscapes and voice. Her song 'Mirage', theme song for the short film by Lena Srinivasan, was nominated in the 'Best Song' for film category of the Jerry Goldsmith Awards 2019.