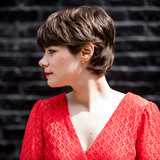 Jazz singer Laura Anglade is currently making a name for herself on the Canadian jazz scene and beyond. Originally from a small village in the South of France and raised in Connecticut, she is influenced by her parents’ gypsy jazz and classical backgrounds. Some of her inspirations include Carmen McRae, Sarah Vaughan, Nancy Wilson, Anita O’Day, Shirley Horn, Mel Tormé and Blossom Dearie. Laura has made several appearances on the New York, Toronto, Québec City and Montreal scenes and has performed at the Festival International de Jazz de Montréal. Her debut album "I've Got Just About Everything", which came out in June 2019 on Justin Time Records, has been met with praise by critics and fans alike. A second duo record is currently in the works and will feature guitarist Sam Kirmayer and special guest Ben Rosenblum. Laura has appeared on Global News, Jazz Today, Whole Note Magazine, and has been recognized by Radio Canada’s Ici Musique as one of the top 5 female jazz musicians to watch out for.