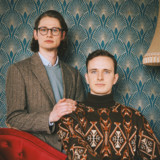 Mabeta is a newcomer duo from Berlin. They believe in a connection between their listeners and themselves. Mabeta wants to create a live set anyone is able to participate in. They are deeply inspired by the performances of electronic music artists such as Bob Moses, Monolink and HVOB. Their sound is described by experts as somewhere between melancholic Tech House and funky House grooves with a bunch of live vocals. If you believe in Mabeta, Mabeta believes in you. Photography: Lynn Janzen Cover Artwork: Julian Seyda