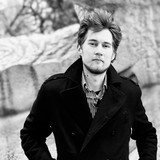 Balazs Toth is a multi-instrumentalist singer-songwriter, producer based in Budapest, Hungary. Also, he is the lead-guitarist, singer-songwriter of the Hungarian indie-pop rock band Marble Mist. His music merges blues, folk and country with a modern edge, while still maintaining the rich heritage of these genres.   His first single 'High Spirit' was released on July, 2019, which was followed by another instrumental track, 'Yangtze' early December, 2019.   His four track debut EP 'I' was released on Dec 25th, 2019. Written, played and recorded by Balazs the songs feature classic reverb filled slide guitar and Hungarian lyrics. The EP - I (One) - is an optimistic and reminding take on love as a universal power connecting all.   The Ireland inspired folk song 'May The Sun' was released on early 2020. The critically acclaimed follow up track 'Csodakerék' featuring singer-songwriter Agata Angilella was released as the second single before his debut LP, which is expected in 2021.