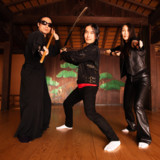 Christian heavy metal band from Japan. It started as Tak "Tone" Nakamine's solo recording project and formed as a band around 2004. They play various types of music but their main style is 1980's hard rock and metal. In 2006 they flew to Germany and recorded an album with a renowned producer Sascha Paeth. In 2008 they became a Christian band and started touring around the world. Since then they keep making one of a kind metal music with spiritual element. They called themselves "The first Christian heavy metal from Japan". One of their best album is

Jesus Wind which is a concept album about Japanese history from a Christian viewpoint.