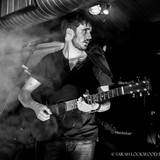 A stalwart solo acoustic artist on the Watford/Milton Keynes music scene for over a decade, having toured California amongst extensive gigs throughout the UK, London and Europe from the age of 21, Tom (Now 34) continues to steadily make his mark with his "ability to blend acoustics and rock in a unique way; creating a perfect blend of music for all ages". -- From sing-alongs to heartfelt ballads, Tom has an intense emotion to his vocals & his music has subtle elements towards indie & folk, but his real strength lies in his storytelling and confidence/presence onstage. An honest & bold acoustic troubadour! -- As Dan O’Shea of 15 Minute Club stated in 2010 – “Charming and beautiful, Tom has a resolute integration between his music and his personality. Both warm and secure, his confidence is infectious”. -- As the Watford Observer stated in 2009 - ""Tom’s soulful acoustic sound translates beautifully into both his powerful ballads and upbeat melodic tracks. Catchy songs about life, love and everything in between mean that this talented young musician is definitely one to watch". -- Appearing both as a solo artist and alongside an ever-changing band line-up (The Chapter), Tom works alongside hugely talented members of local bands, all personal friends, to bring the songs to life! A true collaborator.