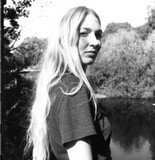 1/5 of Her Songs  Moving to London 9 years ago from her hometown of Roskilde in Denmark – Dahlstrom has made a significant name for herself in those years for her warm, jazz-tinged, soulful R&B. Now, she is preparing to release her long-awaited debut full length album, Like Sand – out May 22nd 2020. Recorded between LA, Copenhagen and London over the past 12 months – Like Sand features collaborations with the likes of South London soul singer James Vickery, California based songwriter and producer Jeremy Passion, Brooklyn based singer/producer Elijah Fox, LA-based JNTHN STEIN, British guitarist Beau Diako – and more. Collaboration is a notion which has always been important to Marie. Not only wanting to work with people she admires and looks up to – but also a firm believer in promoting new talent. “I really want to be personally involved in generating a culture of promoting exciting new artists. A lot of these upcoming artists have studied their instrument and craft – and deserve to be heard,” she says, highlight-ing the likes of Conor Albert, DanDiggas, Sipprell, and her flatmate Aligo – all whose contributions can be heard on her debut album.