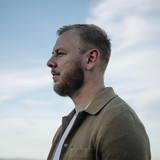 Ansett moved to Denver, Colorado in 2014 and started playing every local open mic he could find. He has since found fans all over the country with more than 14 million streams online, a song placed in Marvel's "The Punisher" , and the title of "songwriter to watch" from The Huffington Post. The songs combine folk and R&B to great effect, and beyond the genre, Artist Review wrote: “This music is soul therapy.”  His latest single "Ease" was premiered by American Songwriter and is the first of four songs centered on the theme of rest. The second song "Just Fine" released on February 5th, 2021.