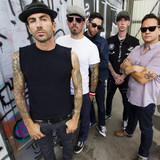 The Turbo A.C.’s are back from the brink! “The brink of what?” you may ask. Lead singer and founder Kevin Cole narrowly escaped the collapse of his NYC apartment building by relocating to Puerto Rico… only to have his home and punk rock pizza parlor decimated by Hurricane Maria. What better time and place to write and record the perfect surf-laden punk rock record for a new generation who despise the government, their parents and each other? And with the help of an emergency crowd-funding effort organized by stateside friends, The Turbo A.C.’s did exactly that.   Formed in the back alleys of New York in the early 90’s, the band released a number of EPs, full lengths and compilation tracks on various labels . Radiation is thirteen driving tracks of classic outcast hooks, seething rage and scathing commentary on politics, relationships and life in general. After getting every shitty hand that life can deal them, these battle-scarred rock n’ roll stalwarts prove that you can still end up basking in the sun on the beach just like Andy Dufresne in Shawshank Redemption.   “The AC’s have been smacking the listener around in the well worn dark alleys still crusty with the puke and blood of streetpunk’s heroes and villains.” – 4 out of 5 stars – Alternative Press