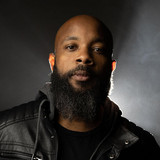 Jelani Robert Clay (born December 24, 1981) is an American rapper, songwriter, music producer, and spiritual teacher from Chicago, IL, known professionally as JClay. He makes amazing hip-hop music that will show you how to find & keep peace always.   Best known from his hit singles Let Go and I Like You That Way, JClay’s music is best described as a mixture between Drake, Kanye West and 2Chainz, with a spiritual twist added to the equation. He is credited for being one of the leaders of the spiritual hip-hop movement, which is the dominant style of his songs and lyrics, as heard on his debut studio album IAMNOBODY, IAMSOMEONE released March 24th, 2021.   With spirituality and positivity as his brand’s core elements, JClay’s spoken-word flow helps him reach the soul and mind of those seeking guidance and support through music.