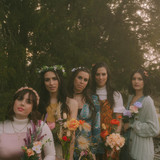 We are six sisters originally from Sacramento, California. We come from a Catholic family of eleven kids. Our mom taught us all to sing at a young age. In 2007, we officially started our band, playing shows around our small town and the surrounding areas. In 2009, we uploaded a cover of Party In The USA to our YouTube channel. It ended up getting 20,000 views in less than 24 hours. Within 9 months of posting that video, we ended up signing with Island Records, a part of Universal Music Group. We moved down to L.A. in 2010 to begin our new chapter as recording artists with Universal. For the first couple years, we were excited, focused and passionate. But after years of disappointments and pushback from people in the industry for how we wanted to run our career, we ended up leaving our record label and moving 2,000 miles away to Nashville, Tennessee. In spring 2015, we started our new chapter in Nashville as independent artists. Since we moved to Nashville, we have toured Europe, South America, and the United States, as well as played festivals in the Philippines, Europe, and we even appeared on a T.V. show in China. Our goal is to be a positive and hopeful place for people to go, in all seasons of life, but especially when they are losing hope and hanging on by a thread. We hope that as you listen to these songs, they bring you hope, healing, true joy, and freedom. All we do, we do for the love of God, and through Him, we hope to love every person He places in our path.