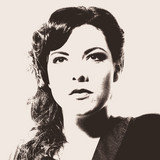 Smouldering, vintage latin and jazz inspired songs with a contemporary sheen - the music and aesthetic of Caro Emerald have been capturing hearts and minds across the continents since 2009. Backed by creative minds, songwriters and producers David Schreurs, Vincent Degiorgio and Jan van Wieringen the Amsterdam/Toronto based group blends smokey hiphop beats, loops and samples with jazz, 60's movie scores, latin and

bigband music to a unique, upbeat and infectious sound. Their debut album "Deletes Scenes From The Cutting Room Floor" (2010) was an overnight smash, resulting in over 2 million album sales, #1 hits in the UK, The Netherlands (longest #1 album ever, 30 weeks) and top 5 hits in the rest of Europe. Caro has performed around the globe on stages including the Royal Albert Hall, Glastonbury mainstage and Hide Park - to name but a few.