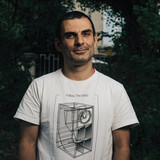 Brain Damage ... dub & experiments since 1999 ... With more than 14 albums and 750+ concerts behind him already, Martin Nathan ventures for 20 years now, into many artistic and stylistic experiments, under the name of Brain Damage. Acclaimed as one of the founders of the French dub scene in the late 1990s, he soon appears as a major influence for a whole generation of musicians. But the artist is definitely not among those who forever rest on the models he founded, and he constantly reinvents himself, as his myriad projects flow, especially multiplying always more prestigious collaborations with figures like High Tone (fr), Vibronics (uk), Horace Andy (Ja), or Harrison Stafford (usa) more recently. Along with his many productions, it is also with his truly live and explosive performances, that Martin Nathan has grown a solid reputation throughout the international scene, and it is exceptionally rare to see an artist celebrating his 20th career anniversary, with so much vitality and creativity. New album "Brain Damage meets Big Youth" : out on May 28th 2021 Full detailed bio at www.brain-damage.fr/bio