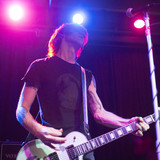 Riotous Rock and Roll. Recommended Listening: <i>This Might Be My Breakdown, I Think We're Alone, Kerosene</i> Northwest duo The Wild Lips’ debut album is more than fourteen tracks of pulverizing drums, ragged guitar, and throaty vocals; its proof that there’s life in Rock n Roll. The Wild Lips is Billy Barros (Vocals, Guitar) and Preston Darvill (Drums), though by the huge noise they make you’d think the band is much bigger. Inspired by troubadours, punk poets, and Americana outlaws, Barros decided to pick up his own guitar - and you’ll be thankful he did. Barros channels a genuine celebration of heartache, punching out chords and singing from the gut. All the while, Darvill’s heavy hands and perfect time make what sounds like a death match with a drum kit in a thunderstorm look easy. The two brought sharpened teeth and strong arms to the studio to record their debut album, Shameless. Shameless is the culmination of the band’s adrenaline-fueled tear through the northwest dive scene, leading their fans in epic "sweat-drenched sing-alongs" (The Stranger). Barros and Darvill deliver raw energy and emotion that can be felt in the record’s unstoppable determination. “We wanted to make the closest thing to a live album, without actually making a live album,” Barros explains. “Everything you hear on the record is exactly how we perform it on stage, just the two of us."