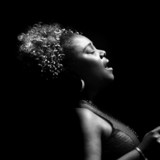 Soul singer Nekita Waller is Connecticut's 17th State Troubadour. The Connecticut State Troubadour is an honorary position, established in 1991 by the Connecticut General Assembly. Nekita has been entertaining audiences since her stage debut at the famous Apollo Theater as a child. She sings feel good pop soul and R&B throughout the region and performs annually as a headliner for several town summer concerts series with her band. As a soloist, Nekita sings the national anthem for professional sports teams and is also an experienced session artist lending her vocal talent in the recording studio on projects with Grammy and Emmy award winning producers. Nekita is influenced by many soulful artists including Ms. Aretha Franklin and Ms. Sharon Jones.