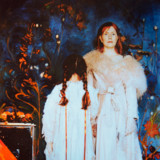 Astrid Swan is a Finnish singer/songwriter who has released six critically acclaimed albums in Finland and internationally. Over the last 15 years Swan has explored themes of embodiment, feminism, loss, trauma and hope in her music. She has performed all over Europe and the USA. In 2018 Swan won the prestigious Teosto Award for the songs on her album From the Bed and Beyond (2017). She was also nominated for the Nordic Music Prize the same year. From The Bed and Beyond was written and produced by Swan. The songs depict the aftermath of breast cancer. It is about the body; giving birth, becoming a mother, then becoming a patient – becoming a physical body that is defined by medicine, controlled and intervened, unknown and simultaneously more feeling than ever. From the Bed and Beyond is a pop record about loss, death, grief and hope. In October 2021 Swan releases her seventh album, D/other.