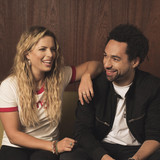 An English duo with a knack for crafting pitch-perfect American country-pop in the vein of Lady Antebellum, Kacey Musgraves, and Florida Georgia Line, the Shires came into existence in 2013 after Hertfordshire guitarist, vocalist, and songwriter Ben Earle, a struggling solo artist who had toured with KT Tunstall, posted "there must be a country singer somewhere" on his Facebook page. A response came from nearby Bedfordshire in the form of Crissie Rhodes, a talented vocalist who had been honing her craft at weddings, pubs, and clubs. The pair bonded over their mutual love of artists like Dolly Parton, Kacey Musgraves, and Alison Krauss, and began writing and performing together; they eventually inked a deal with Decca Records in the U.K. and Universal Music Group Nashville across the pond. Their first single, the aptly named "Nashville Skies," debuted in 2014 in anticipation of their full-length studio album Brave, which followed in February 2015. The duo promoted the record with a nationwide tour and returned in 2016 with their second album, My Universe, which entered the U.K. chart at number three. Their third effort, 2018's Accidentally on Purpose, recorded in Nashville with Lindsay Rimes, was their attempt at a proper crossover record, taking inspiration from the contemporary U.S. country scene with big pop hooks and choruses. Following the release of the album, the duo headed out on a lengthy U.K. tour before rounding out the year in support of Shania Twain. 2019 saw them return to Nashville to record what would become their fourth studio album, Good Years. The release was issued at the beginning of 2020 before the pair headed out on a U.K. tour. ~ James Christopher Monger, Rovi