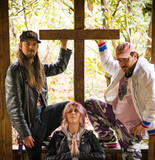 Wild west themes, power surf and punk rock cooked up into one turbulent jam that’ll spin you through scorching deserts, relentless waves, secular terrains and outer space dynasties.   Female fronted and formed by Aimee Jacob Oliver in 2014 with tasty bass licks from Duane Duaneson and the prodigious drumming styles by Marcus Trujillo, Harriers of Discord remains a force to be reckoned with. The LA based band, now current residents of Asheville, NC, will knock you down and pick you back up again with their eclectic range of instrumental scores, powerful and heedless vocal harmonies, soothing ballads and frenetic, progressive riffs that refuse to quit, leaving nobody left out.