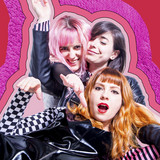 Brooklyn alt rock/new wave/pop power trio NEW MYTHS is the collaboration of Brit Boras (guitar/lead vocals), Rosie Slater (drums/vocals), and Marina Ross (bass/vocals). The trio writes what they love, combining elements from bands such as Garbage, Elastica, Siouxsie and the Banshees, and The Pretenders. In 2012, NEW MYTHS released their self-titled EP. The first single, “False Gold” was immediately featured by Lou Reed on his XM radio show and used in several ad campaigns for companies such as Gucci and Reef Surfwear. Via their own record label, NEW MYTHS released their debut LP, “Give Me Noise,” in 2014. Following the release, the band was written up by major publications such as The New York Times, The Guardian, and Pop Matters. In 2016, Steve Lamacq of BBC Radio 6 featured the band in his “Live From SXSW” show alongside acts like The Kills and Florence + The Machine. NEW MYTHS has performed at music festivals such as SXSW, Pop Montreal, CMJ, Northside and Destination Moon. The band members have been spotted backing up acts like Kristin Kontrol and Frankie Rose, and singing in an SNL Digital Short with Paul Rudd. A favorite at Steve Madden Music, they have been tapped as direct support for major acts like Metric and Warpaint. In the fall of 2017, NEW MYTHS hit the road as direct support on tour with Cindy Wilson, (of The B-52s) and in the spring of 2019 toured with The Joy Formidable.