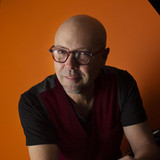 Emmy Award-nominated and Mack Avenue recording artist John Beasley is a far-ranging pianist, composer, and arranger who has performed with music icons from Miles Davis, Freddie Hubbard, Dianne Reeves, Steely Dan, Christian McBride, Chaka Khan and even one stint with James Brown.   Beasley’s latest releases MONK’estra Vol. 1 and Vol. 2 earned four GRAMMY nominations within 13-months of their release. MONK’estra is a smashing 15-piece big band that captures the spirit of Thelonious Monk’s singular music in fresh arrangements flavored with contemporary sounds, a taste of New Orleans, Afro-Cuban rhythms, and hip-hop. The music is described as “some of the most mesmerizing big band music of recent memory”. Beasley is easily one of the most versatile musicians balancing a multi-faceted career co-producing albums with Weather Report’s drummer Peter Erskine, legendary guitarist Lee Ritenour, and the master vocalist Dianne Reeves. When not on tour, he writes for box-office films such as James Bond Spectre and Skyfall. Every year, Beasley steps up to the helm as Music Director for the Thelonious Monk Institute to direct International Jazz Day global concerts collaborating with Herbie Hancock, Chairman of the Institute. This year, the all-star concert was held in Cuba and broadcast throughout the country and on BET TV in America. In 2016, JazzDay was hosted by President Obama at the White House earning Beasley an Emmy nomination for Best Musical Direction.