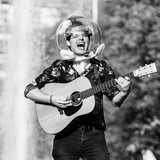 Genuine and honest. Two words that describe not only their approach to music but who they are as individuals. Vedra has successfully crafted a soulful blend of vigorous beats and shamelessly honest lyrics borrowing notes from artists like Against Me, Frank Turner and Dashboard Confessional. The duo pulls together the visceral styles of lead singer Branon Jaggers with the classically trained ears of percussionist Kirby Newman providing a final product rich with emotion and logic. Vedra’s debut self-titled EP, released in 2016, has aired on over 50 radio stations nationwide so far. In the Summer of 2017 the EP charted on KSYM in San Antonio, TX, KWLC in Deborah, IA and WFCF in Saint Augustine, FL. Their debut EP along with their upcoming single “Smoke & Mirrors” were recently picked up for licensing by MTV, Discovery Channel, TLC, Animal Planet, Velocity, and the Oprah Winfrey Network. They are currently working on writing and recording their sophomore EP that’s shaping up to be the best representation of their sound as a collective thus far.