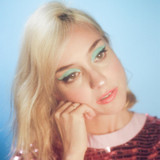 Russian Red is Lourdes Hernández, a singer-songwriter, performer, and artist from Madrid. Russian Red first came to prominence in her native Spain with the release of her 2008 debut album, I Love Your Glasses. This was followed by Fuerteventura in 2011 and Agent Cooper in 2014, as well as an increasing international presence and extensive touring throughout Europe, Latin America, Asia, and the United States. Currently based in Los Angeles since 2013, Lourdes continues to create music in collaboration with contemporary dance and film along with acting and running a business in Highland Park.