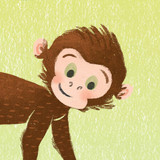 Nursery Rhymes 123 began in 2010 as collaboration between BAFTA award winning director and father-of-two Dan Smith, and UK based songwriter Martha Bean. Having been frustrated at the lack of good-quality Nursery Rhymes available online, they created some beautiful animations for YouTube with music which parents could bear listening to on repeat!   These days, the Nursery Rhymes 123 music team also includes Martha’s partner-in-crime, Joel Evans (also known as the artist Tiny Eyes). A singer and multi-instrumentalist, Martha plays a wide range of different instruments on the album including piano, double bass, cello, banjo, guitars, ukuleles, recorders, autoharp, mandolin, melodica and percussion. Joel co-writes the original songs with Martha, as well as being the brains behind mixing and mastering the songs.   Their first album 11 Nursery Rhymes and Songs was released in 2013. For parents who’ve had to endure countless hours of children’s music made with cheap sounding keyboards and synthesisers, the variety of instruments on these records – and the focus on real sounds – will come as a breath of fresh air.