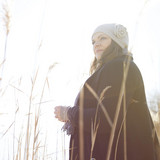 Born in 1971 as the youngest of three, it seemed clear from the beginning that this kid liked to be heard! At least – according to her familiy - she knew how to use her voice way before her legs. If the mother wanted her outside for a moment of peace, she would sit her down behind the house and the little girl would belt out the wohle sunday-shool-repertoire – much to the enjoyment of an elderly neighbour. Learning to play the fllute and the violin were the next musical steps. In her teenage years she taught herself to play the piano and guitar and trained her vocal cords for hours to the likes of Whitney Houston, Sandy Patti, Amy Grant, etc. After having the opportunity to be part of a musical production, the performance bug was caught. Since then she collected a lot of experiences as a singer in church as well as a soloist in several Gospel formation, worked as a background vocalist in over 10 projects, received professional vocal training in Esther Feingold's studio in Berne, before starting to work as a vocal coach herself in 2008. In 2010 she enters the stage for the first time as a solo artist with an accoustic programme with originals as well as covers. She releases her first EP Beauty from Ashes in 2012, produced by Chris Hess and has been touring since then. The first full lenght album Promise of Spring