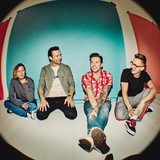 Similar to fellow British pop act Busted, London-based McFly came together and quickly won over the young masses with their boyish charm and lively tales of adolescence. However, while Busted shared commonalities with the punk-edged accessibility of acts like blink-182 and Simple Plan, McFly owed a bit more musically to bands like the Beach Boys. Naming themselves after Michael J. Fox's character from the Back to the Future series, the guys -- Danny Jones (guitar/vocals), Tom Fletcher (guitar/vocals), Dougie Poynter (bass/vocals), and Harry Judd (drums) -- released Room on the Third Floor in the fall of 2004 on Universal. The album went straight to number one in the U.K., an achievement that landed them in The Guinness Book of World Records as the youngest band ever to do so. It produced a slew of Top Five hits as well, including "Five Colours in Her Hair," "Obviously," "That Girl," and "Room on the Third Floor," the first two of which peaked at number one on the U.K. charts. McFly started off 2005 with a Best Pop Award win at the Brits, and later in the year released the charity single "All About You," which also contained a B-side cover of Carole King's "You've Got a Friend." The proceeds from the single benefited African communities affected by HIV/AIDS, and as a result, the band spent some time early in the year visiting with some of these villages in Uganda. McFly issued their follow-up record, Wonderland, in the U.K. in August 2005; filmed during a show in Manchester, the subsequent Wonderland Tour 2005 DVD appeared that fall. The bandmembers next surfaced with roles as themselves in the spring 2006 Lindsay Lohan teen movie Just My Luck. A record of the same name, though not the movie's soundtrack, was released that May in the United States, which contained tracks from their other albums. The full-length Motion in the Ocean followed that fall. One of its singles, "Please, Please," caused an initial stir among gossip columns and bloggers as it was apparently written by members of McFly (everyone but Judd, that is) about Judd's alleged romantic relationship with Lindsay Lohan on the film's set. During 2007, the band released a compilation titled All the Greatest Hits, which collected their top U.K. singles and included new songs, such as single "The Heart Never Lies." The following year, they traveled across the world to Australia and set about recording their fourth studio album, Radio:Active. The record was self-released on their Super label, after the group parted ways with Island Records. It was first issued via a promotion with British newspaper The Mail on Sunday before appearing in stores alongside a deluxe edition. McFly returned to Island in 2010 and released Above the Noise, where they teamed up with producers Dallas Austin and Taio Cruz on a couple of tracks. They moved away from the adolescent pop-punk sound of their previous releases and opted to embrace their pop sensibilities for their fifth disc, displayed on lead single "Party Girl." In 2011, Poynter entered and eventually won on the British TV series I'm a Celebrity...Get Me Out of Here!, and later that year, Judd won the televised dance competition Strictly Come Dancing. A year later, a second greatest-hits collection appeared, Memory Lane: The Best of McFly, which featured U.K. number one singles "All About You," "Five Colours in Her Hair," and "Transylvania," and represented a concise collection from the pop/rockers. The band's extracurricular activities continued into 2013 as they hooked up with fellow punk-poppers Busted to form the supergroup McBusted. The combined bands embarked on a tour and released an eponymous album in 2014. The group's tenure was cut short when former Busted member Charlie Simpson returned to the band. McFly made their return in 2016 with a sold-out greatest-hits tour and a subsequent live album. In early 2019, the group announced their return to music, before issuing a compilation of unreleased demos, The Lost Songs. This was followed in 2020 by the group's first studio effort in ten years; titled Young Dumb Thrills, the band's sixth album was preceded by the singles "Happiness" and "Growing Up." ~ Corey Apar & Scott Kerr