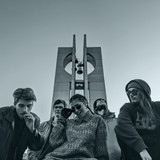 Godzillasexbike were born by chance in 2017 in Brianza, Italy. They immediately began to write music, and in a short time the songs transformed from a simple collection of chords to real diaries of personal and emotional growth through the pains of early adulthood. In 2019, after a break of a few months, the band released Barely See The Sun, their debut EP, which shows all the energy, feelings, anger and grace developed in recent years and carefully sewn into their songs. After a silent 2020, in 2021 the band went back on stages and in the studio to write their debut album.