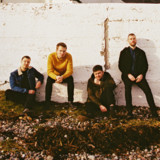 Tide Lines are a four-piece band from the Scottish Highlands. Their latest album, Eye of the Storm, finished its first week at number 12 in the UK Album Charts in May 2020: topping both the Scottish and Independent album charts in the process. Their sound has been described as “…Folk with rousing rock, sparkling electronics and escapist lyrics….awash with arms-aloft sing-alongs.” (The Sunday Times) and “…roaring tunes embracing anthemic lift-off and wide-eyed wonderment” (The Daily Mirror) In 2019, they were named “the Rising Sound of Scotland” at the Nordoff Robbins Scottish Music Awards - one month after selling out the 1900 capacity Barrowland Ballroom in just 5 minutes. The band formed in 2016 and write most of their original material in English but always with a nod to their Gaelic heritage.