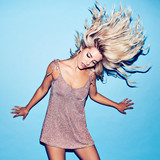 First hitting the charts as one-fifth of electro-pop vocal group the Saturdays, Mollie King is an English singer and songwriter also known for prior appearances on The X Factor and for her later solo releases. Born in the London borough of Wandsworth, King skied competitively in her youth, eventually representing Great Britain in alpine skiing before auditioning for the U.K. edition of The X Factor in her late teens. Focusing on singing as her main ambition, she didn't make it through auditions on her first attempt on the show, but did two years later in 2007 as part of the all-female pop group Fallen Angelz. They were eliminated in the boot-camp rounds of Series Four. The experience got her a successful try-out for another pop outfit, the Saturdays. By mid-2008, she had toured with the group in support of Girls Aloud, and had signed with Fascination Records, an imprint of Polydor, with bandmates Una Healy, Vanessa White, and two former members of the Top Ten-charting S Club Juniors, Frankie Sanford and Rochelle Wiseman. The Saturdays' first single, "If This Is Love," sampled Yazoo's "Situation" and reached number eight in the U.K. They went on to chart in the U.K. and Ireland with the albums Chasing Lights from 2008, the following year's Wordshaker, 2010's Headlines!, 2011's On Your Radar, and 2013's Living for the Weekend. The group also landed in the Top Ten with the 2014 compilation Finest Selection: The Greatest Hits, which included three newly recorded songs. In 2015, King announced that she had signed with Island Records. Her first single as a soloist, "Back to You," arrived the following summer. ~ Marcy Donelson, Rovi