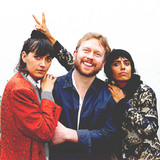 KIN are Grace (GracieSouz), Ritu and Adam. This female-led trio write atmospheric indie pop blending electronic keys and catchy guitar riffs to produce a sound that is unique, dynamic, and constantly evolving. Their reputation as one of the most exciting up and coming bands has been solidified with the release of their long awaited debut single, “Sharing Light” (Produced by Nicholas Alexander (Minimal Animal, Before Breakfast ) & mastered by Tim Rowkins (Mura Masa, Maribou State, Two Door Cinema Club)) which was awarded Get in Her Ears "Track of the Day" and featured as one of Eventim UK's Weekly Picks. Follow up single, "L.O.V.E", was released with a premiere on Refinery29 followed by eagerly anticipated, "Wander & Lost".

Inspired by Andre Aciman’s novel “Call Me By Your Name”, the self-made video had over 6k plays in 24 hours.