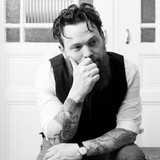 Robbert Duijf, born in 1974 in the Netherlands, is a passionate musician. His music is pure, sincere and full of passion in a mix of old school delta blues from 1930, Gospel and the 1960 British / American folk revival. His first solo album "Going Home" was recorded live in 2019 in his hometown and received good reviews. During the Dutch Blues Challlenge 2019 he played and won the final in the category duo/solists. This gave him the opportunity to represent the Netherlands in 2020 at the International Blues Challenge on Bealestreet in Memphis. There he reached the semi-final. Robbert tells stories, together with his guitar on a typical early finger picking style with a slide and in open and standard tunings. In 2020 he goes into the studio to record a new album. It will be a combination of solo work and guest musicians. The first single will be released on the first of July and the album will be released in January 2021. You can Follow Robbert online and live... Check his website for the planned performances. www.robbertduijf.com