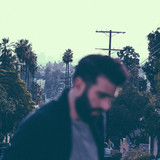 Imaginary Future is the indie folk project of Los Angeles-based singer-songwriter Jesse Epstein. Influenced in his youth by the records of Simon and Garfunkel, Epstein pairs acoustic guitar and intimate vocals with harmonies from his wife and fellow musician, Kina Grannis. Since his debut album Fire Escape was released in 2013, he and Grannis have toured the world and steadily released new music, gaining a loyal following along the way. His newest album, Bigger Things, came out in November 2019.