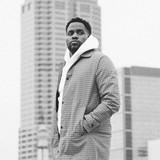 Davey Asaph, better known as David McKissic, grew up in South Bend, IN raised by his mother and hip hop. His mother worked hard to raise him but Jay-Z,

Kirk Franklin, Kanye West, and Lecrae taught him what it meant to be a man. Davey released "Never In My Wildest" in 2017 and it debuted number 23 on the iTunes charts. He followed up with "See Me Now" debuting #30. The music is a mix of soul, r&b, pop, hip hop, and gospel.