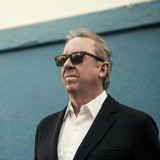 Boz Scaggs is a Grammy winning, multi-genre artist who has been making rock and roll, R&B, jazz and pop music for over 50 years. William Royce Scaggs was born in Canton, Ohio on June 8, 1944, and grew up in Oklahoma and Texas, where he spent his teenage years immersed in the blues, R&B and early rock 'n' roll. After several years as a journeyman musician and traveling throughout Europe, the Middle East and Asia, he eventually settled in Stockholm where he recorded the album Boz. By 1967 he had relocated to San Francisco, and in 1969 released his seminal LP Boz Scaggs, recorded in Muscle Shoals, AL for Atlantic Records. Scaggs has continued to mine a personalized mix of rock, blues and R&B influences, along with a signature style of ballads. 1976’s Silk Degrees became a massive commercial breakthrough, reaching Number Two and remaining on the album charts for 115 weeks.

It spawned three Top 40 hit singles: "It's Over," "Lido Shuffle" and the Grammy-winning "Lowdown."