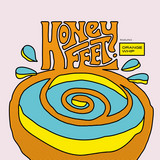 Honeyfeet’s new album Orange Whip was released for the whole world to hear in March 2018, and named

BBC 6 Music’s ‘Album of The Day’. For the last couple of years the Honeyfeet have been a conduit for the ideas and expressions of an exotic mixture of Manchester based musicians. This genre-defying band incorporate styles including jazz, folk and hip hop into their music. Someone once called it Folk-Hop and Barrelhouse-pop, and that’s just vague enough to make sense. For a group who have that rare ability to distil all their disparate influences, while always sounding like their unique selves, Orange Whip heralds the sound of them going overground.