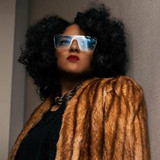 A specialist in soul-rooted ballads and slow jams enhanced with yearning riffs and runs, Marsha Ambrosius secured her standing in post-millennial contemporary R&B as the co-writer of Michael Jackson's "Butterflies" (2001). This immediately preceded her recorded debut as one-half of Floetry. The English duo released a pair of studio albums, including the gold-selling, Grammy-nominated Floetic (2002). Following a floe-schism, Ambrosius resumed collaborative work and quickly established a solo career, debuting with the number two hit Late Nights & Early Mornings (2011), featuring "Far Away," a single nominated for two Grammy awards. Since then, the singer and songwriter has continued to juggle co-writing and/or featured appearances on tracks by the likes of Kanye West, Robert Glasper, and Dr. Dre, and has added to her solo discography with sophisticated and impassioned full-lengths including Friends & Lovers (2014) and Nyla (2018). Originally from Liverpool and raised in London, Marsha Ambrosius met Natalie Stewart as a youth basketball opponent. The two made a deeper connection while later enrolled at the BRIT School for Performing Arts and Technology. An injury prevented Ambrosius from attending Georgia Tech on an athletic scholarship, which prompted her to redirect her energy toward music. A demo led to a publishing deal, and in 2000, Ambrosius and Stewart established themselves as a performing duo in the U.S., specifically Atlanta and Philadelphia. This led to their first song placements on a series of Philly-connected projects scattered across 2001. Ambrosius and Stewart co-wrote Bilal's "You Are" and Jazz's "Love Again" (featuring Jill Scott), two songs produced by Andre "Dre" Harris and Vidal Davis. Additionally, Harris and Ambrosius co-wrote Michael Jackson's "Butterflies," which appeared on Invincible that October and four months later was issued as a single that went Top 20 pop. During the song's ascent, Glenn Lewis' World Outside My View was released with a handful of songs involving Ambrosius' input. As Floetry, Ambrosius ("The Songstress") and Stewart ("The Floacist") debuted in October 2002 with Floetic. A Top 20 entry certified gold within nine months of release, it was nominated for a 2003 Grammy in the category of Best Contemporary R&B Album, while its title track was nominated for Best R&B Song and Best Urban/Alternative Performance. The Top Ten R&B/hip-hop hit "Say Yes" added to the tally of nominations the following year when it was nominated for Best R&B Performance by a Duo or Group with Vocal. A live album and several outside collaborations were in the duo's rearview mirror by the time they issued Flo'Ology in November 2005. Although it debuted within the Top Ten and earned yet another urban/alternative Grammy nomination, this time for the Common collaboration "Supastar," it was Floetry's final studio album. Ambrosius temporarily linked up with Dr. Dre's Aftermath label. She appeared on Aftermath projects from the Game and Busta Rhymes, but she released only a short and brash 2007 mixtape, Neo Soul Is Dead -- based on instrumentals from The Chronic -- during the affiliation. Into the early part of the following decade, Ambrosius added Nas, Alicia Keys, Jamie Foxx, and Wale to the list of artists who sought her for writing and featured appearances. Signed to J Records, she finally made her proper solo debut in March 2011 with the number two hit Late Nights & Early Mornings, on which she covered Portishead's "Sour Times," delivered the scathing dismissal "Hope She Cheats on You (With a Basketball Player)," and with Just Blaze cooked up the ballad "Far Away," a Top Five R&B/hip-hop hit nominated for Grammy awards in two categories: Best R&B Song and Best R&B Performance. Between LP activity were appearances on recordings by the likes of 9th Wonder, Daley, Kanye West, and Robert Glasper Experiment. A full return was made on RCA in June 2014 with Friends & Lovers, a Top 20 entry as sensual as the debut. Among the tracks was the Sade-interpolating "Stronger," co-produced by Dr. Dre, whose Compton was released the following year with Ambrosius a recurring featured artist. Floetry reunited to tour across 2015 and 2016 with plans to record, but Ambrosius and Stewart broke up again, leaving the two to resume separate solo activity. Ambrosius remained in demand, contributing most notably to Common's Black America Again, A Tribe Called Quest's We Got It from Here...Thank You 4 Your Service, Nipsey Hussle's Victory Lap, and Royce da 5'9"'s Book of Ryan. The latter two were released after Ambrosius gave birth to a daughter, whose name, Nyla, became the title of her reflective third solo album in September 2018. ~ Andy Kellman, Rovi