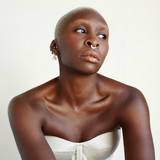 Born Cynthia Onyedinmanasu Chinasaokwu Erivo to Nigerian parents in South London, the singer and actress started out on a path to study music psychology at university but ultimately graduated from the Royal Academy of Dramatic Art. Cynthia Erivo made her West End debut in 2011 before collecting Grammy and Tony Awards for her portrayal of Celie in the 2015 Broadway revival of the musical The Color Purple. She made her big-screen debut in 2018's Widows, directed by Steve McQueen. In 2019, Erivo starred as Harriet Tubman in the biopic Harriet, quickly taking Hollywood by storm.

Her performance earned her an Academy Award nomination for Best Actress, and one for Best Original Song for "Stand Up," which she co-wrote for the film with Joshuah Brian Campbell.