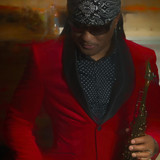 Smooth jazz-styled soprano saxophonist Marion Meadows was born in West Virginia and raised primarily in Connecticut. After adopting the classical clarinet at age nine, he moved to the saxophone as a teen, later studying composition and arranging at Boston's Berklee College of Music. A protege of Joe Henderson and Eddie Daniels, Meadows later served a long stint as a member of Norman Connors' Starship Orchestra. After a series of session dates and sideman gigs, he made his solo debut in 1990 with the RCA release For Lovers Only, followed in 1992 by Keep It Right There. Resurfacing two years later with Forbidden Fruit and 1995's Body Rhythm, Meadows jumped to Discovery to issue 1997's Pleasure. He then moved to Heads Up for Another Side of Midnight (1999), Next to You (2000), and In Deep (2002). His music remained a staple of smooth jazz radio until the format died in the 21st century, but his releases for Heads Up and his international touring kept him more than busy, as did his other activities: Being a semi-pro cyclist and a graphic artist/designer. In 2004, he issued Player's Club with assistance from a handful of co-producers. It peaked at 14 on the Jazz Albums chart. 2006's Dressed to Chill offered its title track as a single. It peaked at number three on the Smooth Jazz Songs chart and remained on the list for over 40 weeks. Secrets, with the same production team he'd used on his two previous albums, peaked at number 11 at Jazz Albums, and was Meadows' final album for Heads Up. All of tracks were composed by the artist save for its final number, a lithe cover of Pat Metheny's "Here to Stay." The saxophonist/composer spent time touring the U.S, Japan, and the Caribbean over the next several years. He signed with Shanachie in 2012 and released his debut for the label in the winter of 2013. Entitled Whisper, the only member of Meadows' veteran production team remaining was Mike Broening -- newcomers Rahni Song and guitarist Carlos Pennisi were recruited. The set peaked at nine on Jazz Albums and 31 at Heatseekers. After a successful tour, Meadows re-entered the studio to emerge with Soul Traveler, co-produced with Pennisi. The album hit number five on the Jazz Albums chart and remained there for eight weeks. The following year, the saxophonist received a doctorate in music from Wilberforce University. His spring 2018 release Soul City was co-produced with Chris "Big Dog" Davis, Rahni Song, and Dave Love. Its singles included guest spots from Norman Brown & Joey Sommerville on the title track, Maysa & Peter White on ""Dreamin'," and Will Gaines on "You." Released in January, it attained the number two spot at Jazz Albums by March. ~ Jason Ankeny, Rovi