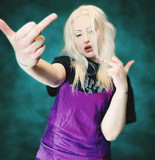 Du Blonde's swaggering, heart-on-sleeve rock came into being when musician, composer, animator, and video director Beth Jeans Houghton turned writer's block into an opportunity to reinvent her music. On albums including 2019's self-produced Lung Bread for Daddy, Houghton matched the heavy sounds of punk, blues, garage rock, and soul with equally cathartic songwriting. While recording the follow-up to her eclectic 2012 debut, Yours Truly, Cellophane Nose, Houghton felt creatively blocked. After breaking up with her band the Hooves of Destiny and scrapping an album's worth of material, she spent much of 2013 traveling the United States. Her trip to the Pacific Coast with Future Islands' Samuel T. Herring resulted in several songs that became the basis of her new musical incarnation. Working with Nick Cave & the Bad Seeds drummer Jim Sclavunos as producer, she recorded Du Blonde's first album, Welcome Back to Milk, in London and Los Angeles. Featuring the Herring collaboration "Mind Is on My Mind," the album appeared in May 2015. Following the Welcome Back to Milk tour, Houghton embarked on several projects that included her comic book series Butt Hurt and directing and animating music videos for artists such as the Red Hot Chili Peppers, Ezra Furman, and LUMP. After seeking help for her lifelong issues with anxiety and depression in early 2018, she began work on the second Du Blonde album. Recording in London and Oakland, California, Houghton took on production duties and played most of the instruments, working with bassist Jorgen Jorgenson Briggs and drummer Sam Durkes to round out the album's sound. The unflinching results, Lung Bread for Daddy, arrived on Moshi Moshi in February 2019. ~ Heather Phares, Rovi