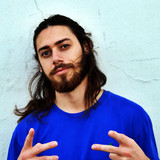 DJ & producer 3NGLMN (pronounced “Englemen”) developed an interest in music at a young age while growing up in a small-town north of Austin, Texas. Some of his first endeavors as a musician involved playing percussion in the school band, and drumming for multiple different garage bands. Though he started out playing pop-punk & hardcore music, he eventually began producing his own songs and focused on creating a sound of his own. After college, 3NGLMN traveled throughout the states to get a taste of the many different music scenes in the US, eventually moving back to his hometown to hone his craft. Soon after, he moved to Los Angeles to pursue his dream of working in the music industry, living in his van for his first four months in the city. Since basing himself in Los Angeles, 3NGLMN has produced, recorded, and engineered music for various artists. He has gained an audience performing at numerous venues in LA, including Catch One and Avalon. His EP “Hubble” (released in 2018) was the first of his projects to hit major streaming platforms.