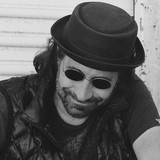 Alan Chapell is a unique character – even by the quirky standards of the West Village, NYC. The product of years of traveling the world, honing his craft and moving seamlessly through musical genres, Chapell’s lush sonic pallet falls somewhere between the progressive pop rock of Bryan Ferry and the jangle rock nuance of 10,000 Maniacs. Growing up on the “mean streets” of Stamford, Connecticut, Alan was something of a musical wunderkind – playing piano and trumpet before the age of six. He recorded with the legendary producer Jimmy Ienner at age 15, and more recently with Talking Head Jerry Harrison. He’s played to jam-packed houses around the world from Managua to Mumbai. It took Chapell a while to get to this point, but audiences across the U.S. are starting to take notice in a big way.