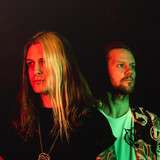 Combining ‘80s style melodic rock riffs with shimmering synthwave melodies and a heartfelt vocal delivery, members Michael and Shaun have established themselves as some of the most uniquely compelling artists within the world of retro revival music. The results speak for themselves.  The retro rockers’ first E.P. Action and Romance, is a synth-heavy fan favorite that has earned millions of Spotify streams to date as well as features on the popular YouTube channel, NewRetroWave.  LeBrock found success once again when they adopted a stronger rock sound with all vocal tracks on 2018’s Real Thing. Packed with fist-pumping retro anthems, the artists’ distinctive and increasingly personal style again earning more features on NewRetroWave along with widespread acclaim from fans and critics alike.  Add to that a full European tour along side synth rockers Dance with the Dead in 2019 and a sell out UK headline tour in 2020, LeBrock have cemented themselves as one of the premier forces in the Retrowave scene.  Now, the members of LeBrock are poised to release their first full length album “FUSE” through indie label FiXT Neon, due for release in June 2021.