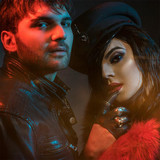 Mannequin Mars - a Danish/Polish pop duo - has always strived to make perfect pop songs from a diverse range of genres. Siblings Kamil and Adeeb Alhaijali launched their career after winning a mixing competition held by Jack Joseph Puig (Lady Gaga, Black Eyed Peas, The Rolling Stones) with their song “You Can’t Love Me”. The brothers went on to sign a deal with Sony Music Denmark and released the singles “Oh My Gosh” and “Killer On The Dance Floor”. Ultimately, the former landed them a gig at one of Poland’s biggest TV shows “Must Be The Music” where the duo performed in front of millions of TV viewers. Immediately afterwards, they signed a new recording contract and released the songs “Tip Top” and “In the Mirror”. With their unique image and catchy pop tunes, Mannequin Mars is set to release new music in 2020.