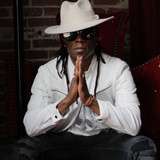 JayQ The Legend is an American singer and songwriter, one of the top Afrobeat performers worldwide. He is currently signed, as well as an executive, with BreakOut Music. His debut single, "Body Talk" hit the top of the Billboard Digital Song and iTunes charts in August 2019, and has charted as high as #10 on the UK Club Charts. He is a prolific writer, and has written recently with Grammy winners Joelle James, 1500 or Nothin’, and Jazze Pha. JayQ The Legend is a role model for African Americans. He is a civil rights and entertainment lawyer turned Afrobeat singer and songwriter. He holds an MBA, and has also served his country as a Marine. As a community supporter and activist, he has written books to help teenagers understand the law to protect themselves and hosted the number one radio show, “Talk Calm”, serving 2 million listeners in the Gulf Coast for 5 years. The show focused on creating a better society and environment across ethnicities and ages. Most recently, JayQ The Legend co-wrote a holiday screenplay called “The App that Stole Christmas”. He not only led the writing and production team, he co-starred alongside fellow singer/actors Ray J and Jackie Long. “The App that Stole Christmas” is slated to be released in Nov. 2020. Born in St Croix, JayQ The Legend came to the mainland United States at the age of 12. His family first laid down roots in New Orleans, and it wasn’t long before the magical music of the city captured his attention.