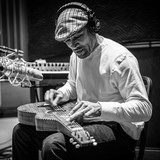 Ben Harper’s new album Winter Is For Lovers unfolds entirely without words. It is a profoundly emotional story told exclusively through the nuance of sound. The narration is provided by a single lap-steel guitar and the music references blues and folk as well as flamenco, Indian and classical, but it transcends any specific style. In that, the al-bum philosophically evokes the American Primitive movement pioneered by John Fahey and Leo Kottke, utilizing masterful playing to create an impressionistic and affecting work. Harper is a three-time GRAMMY winning musician and songwriter. He has produced records for artists including Mavis Staples, The Blind Boys of Alabama, Natalie Maines, Ricky Lee Jones and more. He has recorded albums both alone and with his longtime band The Innocent Criminals, establishing a fanbase throughout the world. And while he incorporates a number of different styles into his unique sound - classic soul, reggae, rock, he is, at his very core, a blues and folk musician. Winter Is For Lovers is an intimate and ambitious creation. The sound of an accomplished musician operating without any semblance of a safety net. It is an artistic acknowledgement of those who came before, and an affirmation of Harper’s years of unwavering exploration on guitar. But more than all of that, the record is proof that a meticulously composed work played on a single lap-steel can wield the same expressive power as an entire symphony.