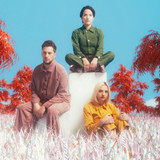 FYOHNA is a numbpop trio from the wild edges of California—music of mountain trout and ash trees as much as it's music of flirtation and rejection. With rushing, sanguine production and vocals like four scoops of Cherry Garcia, the group’s new batch of glitterfolk songs nourish and neutralize. Following the release of their 2017 EP, FYOHNA opened for Bea Miller and Allie X. In 2020 their cover of 'Get What You Give' by New Radicals was featured in the HP advertising campaign 'Madame President' to raise awareness for global warming, education reform, and social justice.