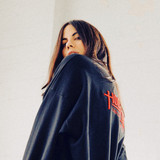 Sofi De La Torre is the epitome of the new global artist. Fiercely independent, staying out of the traditional label system intentionally, and self releasing her own music she has been honing her distinct blend of urban pop music moving around the globe absorbing influences not rooted to any one city. Her music pulls from real experiences lived between moving from Spain to London to Berlin to Los Angeles over the last couple of years. Basking in her metropolitan mindset, speaking four languages and a citizen of nowhere in particular, Sofi is freshly global.