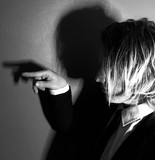 The ability for Divided Heaven to shift between a delicate Americana song to an overdrive rock sing-a-long is a testament to Jeff Berman's songwriting abilities. Divided Heaven has an eclectic list of influences and doesn't shy away from the challenge of incorporating those varying styles in the grand scope of the bands output. Last month, Divided Heaven released a cover of The Beatles "In My Life" and while that song was a solo endeavor, their new single, "The Filthy 15" sounds like it was plucked from Green Day's discography. Produced by Nick Ruroede (Lost in Society), "The Filthy 15" is an ode to the dangerous side of rock music. "The sight of Motley Crue & Def Leppard records being tossed into the fire at a rally was supposed to scare me out of wanting to listen to their music. It had the opposite effect." - Jeff Berman. "The Filthy 15" will be released by Wiretap Records on Friday, May 21st but you can stream it a day early at American Songwriter.