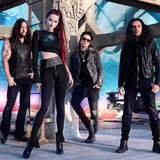 "Music from another world" That's how Edge Of Paradise sound is usually described. Upcoming album, “The Unknown” is Edge Of Paradise's 4th studio album, coming on the heels of their greatly-received 3rd album, and Frontiers Records debut, “Universe”. The band teamed up with renowned producer Howard Benson (Halestorm, Seether...) who, together with Mike Plotnikoff (Halestorm, Three Days Grace) and Neil Sanderson (Three Days Grace) helped the band craft their biggest sounding album yet. Edge of Paradise's founding members, vocalist/keyboardist Margarita Monet and guitarist Dave Bates, have found their perfect partners in crime with the addition of drummer Jamie Moreno and bassist Ricky Bonazza. The band, tighter than ever, is ready to blow everyone away once they are back on the road with this stunning new music in tow. Current plans are for the band to tour extensively through 2022 in support of "The Unknown" as well, with touring announcements coming up soon. Want to be a part of the world? The band is one of the most engaging bands out there, welcoming and interacting with fans from all over the world! So follow them on social media, get to know them after their shows and enjoy the music of Edge Of Paradise!