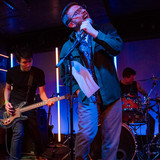 Sik Oheso (pronounced "Sick Oh Hess Oh") is an indie punk band from NYC that makes poppy and polished music with really great drumming. The band was founded in Brooklyn, New York, USA in 2019. The band name is a made up reference to navel gazing and is spelled out using Korean and Japanese characters. Sik Oheso's first two releases quickly gained traction online, allowing them to open for Jerry Paper in September 2019 as their first show ever. The show drew enough people that it prompted Sik Oheso headlining gigs at legendary NYC venues Baby's All Right and Elsewhere. Their debut LP was released in 2020. Their first single of 2021, "Gum," was the recording debut of their live drummer, Seve Sheldon (Wild Ones, Public Eye), who also tracked drums on their upcoming single "Lost and Lonely" out November 3, 2021.