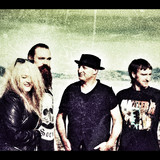 Who would have thought a vocalist's barefooted stomp would cause so much chaos... Overflowing with charisma, New Zealand's female-fronted Mojo Alice brews up a potent combination of primal rock & blues, style, character, & balls. And with over 47,000 Spotify streams and 450 playlist adds in very short order, the band's "fans first" approach is disrupting more than just expectations. On December 15th, 2018, Mojo Alice had just finished their 20 minute set in the finals for the Nationwide Battle of The Bands competition. They had traveled over 900 kms and poured everything they had into this competition. Making it to the top 15 by beating out 80 other bands. Then - just like that - it was all over...they didn't win.....and how did they feel? RELIEVED!! In the true spirit of rock n roll, Mojo Alice vowed to do things their own way. With the release of their debut album "Liquid Sin" in September 2019, Mojo Alice's "Mojo Mofo" army is growing day by day.